Tom kha is one of my favorite soups!  It’s rich, creamy, salty, savory, tangy, and a bit spicy.  I’ve tried many many many times to make a batch that somewhat rivals that of one of my favorite local Thai restaurants to no avail.  But this time I think I finally nailed it.  It’s surprisingly easy and despite what I previously assumed to be the reason why it wasn’t turning out to be as good as Lulu’s, it doesn’t require a trip to the Asian market.  While the traditional version uses galangal, Thai basil, and lemongrass, I was able to create a more approachable version using ginger and lime juice.  This soup comes together quickly and is perfect for a night spent cozying up on the couch! And of course, it’s full of a variety of vegetables, with spaghetti squash instead of noodles or rice, which keeps it lower carb but no less filling!

It does require a few items probably not normally in your pantry, but not to worry!  They’re still pretty easy to find at your local grocery store!  They also add tons of flavor while keeping the ingredient list to a minimum.  So, what are these secret ingredients?  Thai red curry paste and fish sauce!  Both add intense flavor and really give the broth the most satisfying touch of tang and spice!

Additionally, if you utilize a fish sauce that doesn’t contain sugar, this soup is both paleo and whole30!  I used Kame brand because that’s what I was able to find at the store, but Red Boat makes a version without sugar.  While the fish sauce smells a bit funky, you absolutely cannot skip this ingredient!  It was the ingredient that I had been missing on my previous attempts and the flavor it adds is not replicable!  It adds saltiness and tanginess, along with umami (savory) flavor.  It’s made from anchovies, which, if you didn’t know is also the key ingredient in Caesar dressing!  Because of the fair amount of fish sauce used in this recipe, no additional salt is necessary.  And I even cut down on the sodium further by using a low sodium chicken broth.  I also highly recommend using fresh ginger and garlic.  I’m just not sure that dried or powdered versions would bring quite the flavor punch necessary to really make the broth for this soup sing!  And really, the broth is what it’s all about, so don’t skip out on it!

Alright, so besides the insanely delicious broth, I mentioned that this soup is full of vegetables and I wasn’t kidding!  Bell peppers, onion, green onion, chilis, and spaghetti squash are all swimming around in there, and shrimp adds a good bit of protein to help keep you full and satisfied!  For additional flavor, add some fresh cilantro and freshly squeezed lime juice. 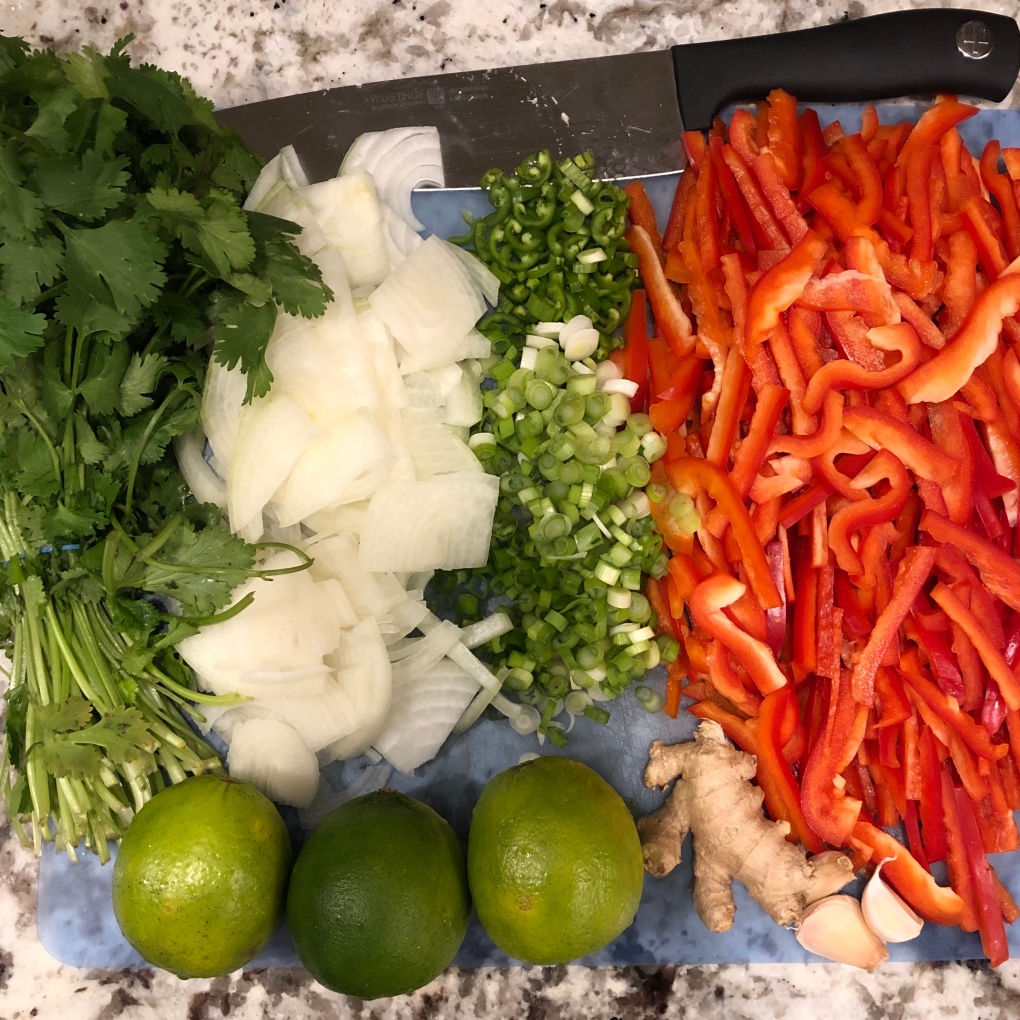